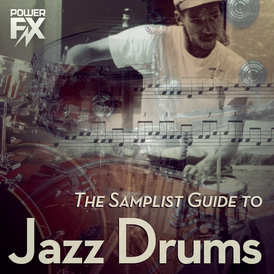 The Samplist Guide To: Jazz Drums

Many music makers would like to incorporate real jazz drums into their music and learn more about to help them combine jazz with contemporary musics. Here, Ralph Peterson, one of the top drummers in Jazz (over 10 records as a leader, Bradford Marsailes, David Murray, Terrence Blanchard, Walter Davis, The Jazz Messengers, Betty Carter, Michael Brecker…) as well as an experienced educator, demonstrates the history of jazz drum beats. So, you not only get jazz beats from early New Orleans to smoking post bop, but you get to see and hear Ralph talk and demonstrate the beats. A truly unique experience in a sample cd and in Jazz drumming.

With so much history and so many great beats, its amazing real jazz beats have not been sourced as sample material very much. Although, the rhythmic complexity and variety of many jazz beats, do not always lend themselves naturally to the cut and paste loop idiom, the deeper you dig, you more you can understand and appreciate jazz music and use jazz beats. We thought The Samplist Guide would be a great way for people to see, hear and learn about jazz beats as well as get some killer sample content.

Ralph Peterson is extremely qualified to do this sample cd/video. One of the hottest drummers in jazz today, Ralph is a respected band leader, recording artist, top sideman and teacher/educator. Besides being an excellent player, Ralph has immersed himself in the history of the music and possesses both the ability technically (and soulfully) to play and articulate the beats.

1) Old School – This section starts out with some beats from the birthplace of Jazz, New Orleans. The Mardi Gras Indian beat based on the Tambourine rhythm followed up by the Second Line beat based on parade/street beats originally played separately on the bass drum and snare drum. The early jazz beats came out of the “Papa Jo Jones”, also known as Mr. Hi Hat – was the drummer with the Count Basie band and he contributed a strong and swinging drive that propelled the Kansas City big band with an irresistible drive. Check out Ralph’s interpretation – it’s rocking! Prior to pioneer’s like Jo Jones, and Big Sid Catlet, drummers played the swing beats almost entirely on the snare drum with rolls. Now, the right hand transferred the “time” to the hi hat, which loosened up the feel.

Sam Woodyard, whose visibility in the Duke Ellington band allowed him to be one of the most influential big band drummers of his era developed a smooth but strong pulse on the ride cymbal and steady 2 + 4 beat on the rim. This beat drove “The Duke” with a groove that was both swinging and tight. It is significant to point out that swing was the dance music of it’s time and that was the main point for the music and the solidness of the beat. Later, Sam Woodyard would also be one of the first drummers ever to use double bass drums.

Gene Krupa was one of the most popular drummers of all time, first performing with The Benny Goodman Orchestra and then with his own band, he was probably best know for his beat and solo with the tune “Sing, Sing, Sing” a rudimental tom-tom based rhythm.

2) Bop – In the late 40’s a new music emerged from swing that was called Be Bop. Charlie Parker and Dizzy Gillespie were the main architects of the music. Like any significant stylistic change, the beats had to change to support the music: more syncopation, more interplay, less repetition, faster tempo. The first drummers associated with Be Bop were Kenny Clarke, Shadow Wilson and Max Roach. Max Roach played on some very instrumental recordings with Charlie Parker and later led an influential quintet with trumpeter Clifford Brown. Max played with great command at fast tempos often associated with be bop. Art Blakey was another very influential drummer during the bop era with his band “The Jazz Messengers”. His “Blues March” shuffle and “Moanin” shuffle are emulated on the disk. The blues shuffle beat is a beat that can be found in rock music as well as jazz and blues and is considered the beat that links the two musics. The next few examples in the bop section of the disk pretty much follow Miles Davis who influenced the direction of Jazz first with “hard bop” and Philly Joe Jones, one of the swingiest drummers of all time coming of a rudimental foundation and then, Jimmy Cobb, who played with Davis during his “cool school” phase. This included playing on the Miles record “A Kind of Blue” which is the best selling jazz record of all time. Then, with the prodigious Tony Williams comes the post-bop era and some incredible ground breaking music with the Miles Davis group that consisted of Herbie Hancock, Ron Carter and Wayne Shorter.

3) Afro-Latin – The afro-latin rhythms have influenced jazz since its inception. The second line beat is based on the clave (punctuated by the bass drum) and Dizzy Gillespie used Latin influences in his music in the early fifties and featured Cuban percussionist Chano Ponzo. Initially in the big bands percussionists played traditional rhythms, but in smaller groups the kit drummer began interpreting the traditional rhythm into the drum set. Check out Elvin Jones style mambos on the disk, Elvin Jones, best known for his work with John Coltrane and his revolutionary quartet, captures the essence of an entire percussion ensemble in his drum set playing – dense, powerful and swinging. The Boss nova beat on the disk is based on the Lee Morgan tune “Ceora”, where drummer, Billy Higgins, smoothly plays the beat with a brush in one hand playing time and a stick playing the clave on the rim.

4) Brush – Based on whisk brooms, which were used accompanying pianist Art Tatum on a recording, the brushes have become a big part of Jazz drums. Some great jazz brush players include Vernel Fournier, Shelly Manne, Philly Joe Jones and Paul Motion.

5) Funky Jazz – Is lightly touched upon here – but the styles of two main contributors and originators of this genre – Harvey Mason with “The Chameleon” and Steve Gadd with a triplet feel beat, are sourced here. It’s important to note that Tony Williams with his band “Lifetime” was one of the originators of fusion-funk Jazz style.

6) Tools – Contains the drum sounds from Ralph Peterson’s kit, plus some rolls and fills. Many different cymbal patterns and tempos are included here. Also, some basic bonus isolated cymbal and hi hat patterns (with a few different cymbals) and brush patterns recorded by Frank Sanderson of me playing to give you some simple options to build on. The isolated hi hats are edited to start on one, for jazz they should be moved in the sequencer to start the beat 2.

When using these samples or programming a jazz drum pattern it’s helpful to remember a few conceptual generalities: Rock, funk and pop emphasizes beats on 2 and 4 with a strong back beat on the snare drum and usually a bass drum one beat 1. The time patterns or beats are powerfully punctuated with the bass drum and snare drum. In jazz 2 and 4 are equally important, but the feel is much more subtle by having the hi hat play on 2 + 4 and the ride cymbal dominate the time feel. So, from a drummers perspective, the opposite limbs (hi hat foot) carry the time. In swing the bass drum carries the tempo with a light, “feathered” touch. Later, the 2 + 4 are often implied more than actually played. Also, the general feel is triplet based than the 8th based feel of rock/funk.